Recently on Instagram there was an edit contest on the different fandoms. I looked at it and said, hey this looks like it would be fun and I never joined an edit competition, so I entered. We were given a task that with certain requirements we had to fulfill. The first one was that the edit had to contain 4 photos, song lyrics, and a purple border on the edit. Now the first thought that ran through my mind was purple border? What can I do with a purple border? I contemplated it for more than an hour, and then I decided that I would worry about it later. Now when you signed up you had to pick which fandom you wanted to base your edits on. Im one of those people who cant always pick what others would do (in this situation it was Hunger Games, Divergent, Maze Runner..) so I chose The Fault In Our Stars. It was a very challenging edit and when I was starting to put it all together, the app kept deleting my edit before I could save it. After the 6th try, it finally dawned on me that maybe this was a sign that I should not do the edit like this. I saw this cool design to put the pictures in, fixed the brightness and filter, added Ed Sheeran’s Thinking Out Loud Lyrics, and placed a nice thin, dark purple border and VOILA. my edit was complete.

My The Fault In Our Stars Edit. Please give credit if you use this photo. 1st place winner! 😀

All the judges re posted my picture saying how amazing it looked and the modest person that I am, I rejected all comments and commented on everyone else’s photo. One of the judges posted a list of names and I was not on the list, but I knew that for a fact that my edit was not going to be even on the list of winners. The edit competition was forgotten and put off until today. I saw a notification pop up about my Instagram feed and I ignored it, thinking it was unimportant and that I could check it later. Little did I know, that this photo would pop up into my feed. 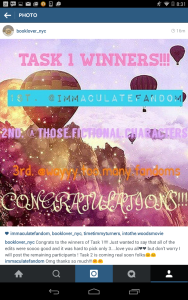 There I was! Placed at number 1! Ichi ban! Numero Uno! Eso! I was suprised that I was ranked that high and that I won first place! I would have been equally happy if I won second or third place…..no never mind I lied. I am probably a million times more happy that I won first place :3 I think that is enough of my little blurb of happiness today! I would like to end with congratulating the other competitors and I shall all see them on task 2 which was given to us already! I hope you enjoy your day and find your little blurb of happiness today! 😀 Until later Loves! ❤

2 thoughts on “A Win from an Edit Competition”